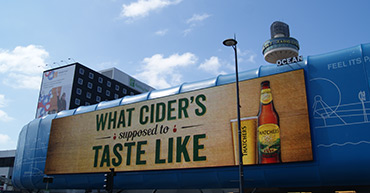 Liverpool’s media wall is the largest full-motion “out of home” digital advertising screen in Europe.  Measuring over 30 metres long and 6 metres high, it is situated in a prime advertising spot directly opposite the entrance to Lime Street station.

The screen, originally installed in 2008, it is now one of the most efficient and technically advanced screens in the UK, viewed by over 500,000 people a week.

We were required to carry out a Land Registry compliant survey to the Liverpool Media Wall, on the eastern perimeter of St John’s Shopping Centre.  The survey consisted of a topographical survey that included all the features of the Liverpool Media Wall and was presented in the required format to a high cartographical standard.  The job also included Ordnance Survey background mapping to enhance the peripheral information.

To complete the job we were required to survey the Liverpool Media Wall’s footprints outside of the St. John’s Shopping Centre site boundaries, as it originally infringed highways property.  Once we had collected the information that the client required a HM Land Registry (HMLR) compliant plan was provided showing any encroachment in order for any issues to be settled between the relevant parties.

Read more about all the services involved in this project : Land Registry, Topographical Survey.