Following an extended period of relaxed exercise (something like 10 years!), MD Andy Roberts set himself a personal challenge of competing in the 2nd Liverpool Triathlon at Kings Dock, Liverpool.

Andy initially entered the super sprint event but as training was progressing well, he changed his event to the longer Sprint distance (750m swim, 20km bike, 5km run).  Initially this started as a personal challenge to Andy, but later became a fundraising opportunity for Clatterbridge Centre for Oncology on the Wirral, a charity close to Andy’s heart.  In addition, Andy’s brother Glyn, an Officer in the RAF Regiment also entered the more taxing Olympic distance (1500m swim, 40km bike, 10km run).

The event took place on the 27th June 2010 and Andy finished in a respectable time of 1h 34m, emerging as the highest individual fundraiser for Clatterbridge for the whole triathlon event, raising over £2500 which has been directly funnelled to the Delemere Ward at the centre.  Andy plans on keeping his JustGiving page open for 3 months after the event should anyone wish to donate.

Andy now has the bug and hopes to compete in the annual King Sturge Property Triathlon at Dorney Lake near Windsor in July.

Andy compiled a 2 minute summary video of the event which can be viewed here. 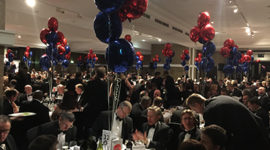